Taichungis located in the center of Taiwan and most visitors to make the city their base for travel in the central region of the island. Taichung is a charming city synonymous with shopping, culture and good universities. The culture of a city is what gives it its and wherever people gather together there is sure to be art and humanity. Let's take a look at Taichung together, this city whose fine arts, music, theater and modern art enrich the senses and nurture the spirit.

A minimalist interior, and relaxed exterior 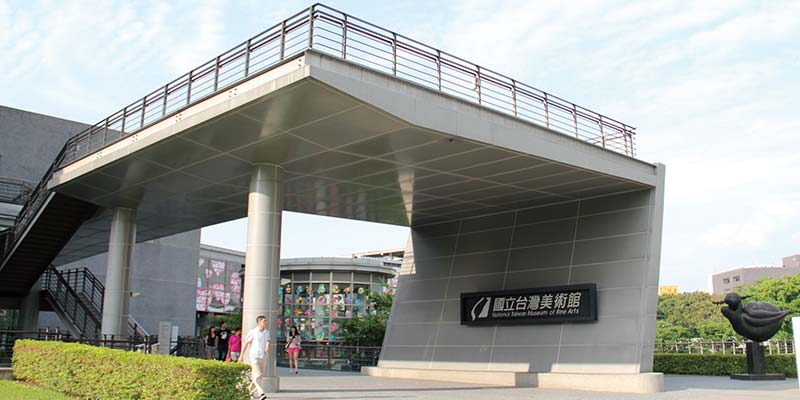 The museum's predecessor was the Taiwan Provincial Museum of Fine Arts. Located on Wuquan West Road in Taichung, the museum covers an area of around three hectares and opened in 1988.The museum's edifice is simple and regular in shape. A flight of steps descends to the ground and natural stone tiles form the main external decoration, allowing the building to merge with the sky. The museum is regularly used as a venue for exhibitions of the works of renowned Taiwanese and international artists and boasts a fine arts street, an arts plaza and a cultural relic supply department, meeting the various needs of visitors. 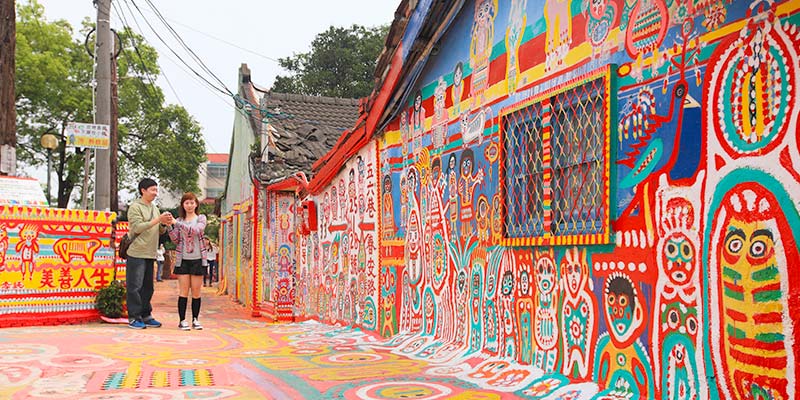 Rainbow Military Dependents' Village is a colorfully painted lane, filled with childlike fun and joy. These portraits, animals and color blocks are moving to witness and have a special local quality. When people began to visit specially to see them, this once quiet and forgotten village came back to life. This curious, dreamlike graffiti is all the work of Huang Yong-pu. He began to paint simply because he was bored. Surprised to find his work welcomed, Huang painted with ever more enthusiasm, turning Rainbow Village into the scenic spot it is today.

Find your path in calligraphy 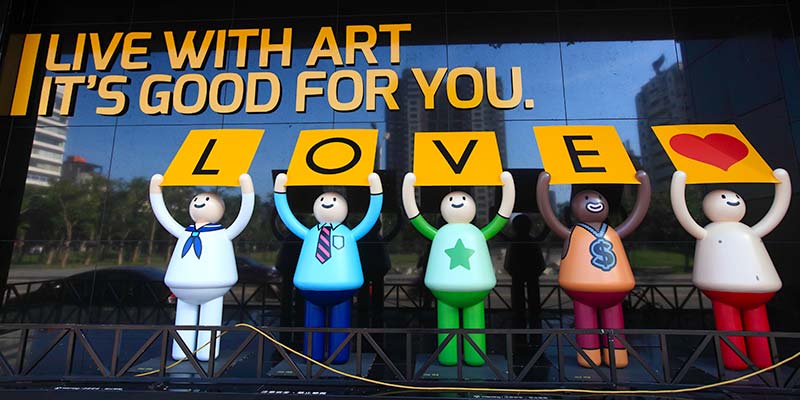 The band shaped city space that is Green Park Road connects the National Museum of Natural Science, Citizens' Plaza, CMP Park Lane, an arts space, the National Taiwan Museum of Fine Arts and a food street. The atmosphere changes with each different activity: sometimes bustling, sometimes tranquil, the space sometimes full, sometimes empty, giving the area a natural harmony and flow like that of grass script calligraphy. As the design was based on the concept of finding the Way the writing of ‘grass script' calligraphy it is also known as the Calligraphy Greenway.

A feast of nature and art 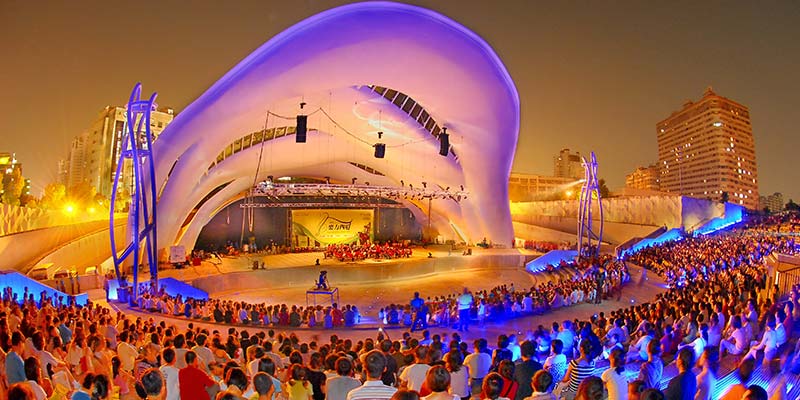 The coliseums of ancient Europe were mostly outdoor circular amphitheaters. Their round shape and outdoor location allowed them to overcome the restrictions of being confined within a black box, as in other venues. The high levels of audience participation and sheer scale of this theater grants a greater number of people the chance to experience the theatrical arts, thereby expanding their leisure opportunities. The audience has a good view of the action and natural sound carries directly to the people in the audience. This is said to be the largest amphitheater in Asia. Visitors shouldn't miss the chance to appreciate this double feast of nature and art!

The latest jewel in the crown of Taichung 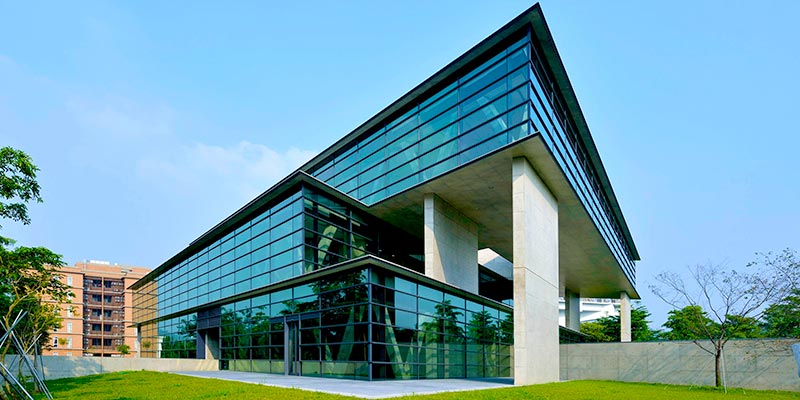 Asia Museum of Modern Art of Asia University is designed by the renowned contemporary Japanese architect Tadao Ando. The triangular shape of the building leaves the viewer amazed by his architectural vision. To give the V shape its precision, the three corners of the building each had to be sixty degrees, an extremely difficult feat. The exposed, hand-laid concrete creates an effect that is both delicate and beautiful. The bold avant garde building is a meeting point for art, nature and humanity, creating new dialogues. The museum set to become a new highlight for visitors to Taichung.

A Smorgasbord of Arts And Life The gallery is the first designated culture and creativity district in Taiwan. The area has invited the participation of artists from various fields and specialist retailers with the aim of creating an arts district with a local character. The museum is between the National Museum of Natural Science and the National Taiwan Museum of Fine Arts and is linked to Calligraphy Greenway, development. It adopts following the ‘district gallery' concept, whereby the environment of the city streets is transformed to give the area and the city an artistic feel. In the surrounding area there are a number of stores where artists gather, giving a bohemian atmosphere to the city.

A leisurely stroll through art 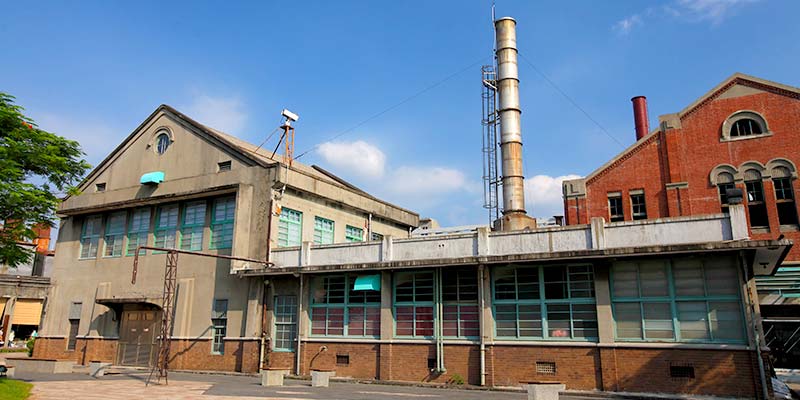 Over 100 years ago during the Japanese Colonial period, the park was a private distillery. As times changed it became the No. 5 Distillery of the Provincial Wine and Tobacco Monopoly Bureau and later Taichung Distillery. Liquor making operations ceased in 1998, leaving the site idle. Thanks to government and public efforts, experts completed surveying and inspection of the site in 2004. The four main exhibitions areas at present, Heng Dao Hall, Ya Tang Hall, International Performance and Exhibition Hall and Truth Academy, were each renovated in turn. It is planned to established dance and music practice studios that will leased out to the public.